The thing has been identified!

Two weeks ago, Zairon shot out of the sandbox at school shouting "There's a worm in there!" Upon not-so-close observation, the worm turned out to be a 5 inch fat-as-a-hot-dog monster of a caterpillar. This is what it looked like: 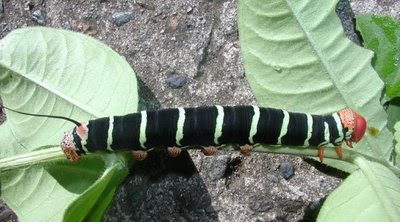 I've never seen a caterpillar wearing those colors or of such enormous proportions in Aruba.

We had a little powow in the sandbox with all the children to decide whether we should let the caterpillar remain free in nature, or whether we could make a temporary home for it in the classroom. The children unanimously decided we should bring it inside for observation. We scooped up the surrounding sand and leaves and put them into our small terrarium and then gently scooped up the caterpillar (with a trowel- thankfully- later on I learned that this species of caterpillar BITES!) and it promptly began to burrow itself under the sand.

We went over our responsibilities as caretakers of this caterpillar while it stays in our room (no foreign objects in the terrarium, speaking softly around it, and doing our best to make sure it feels safe and comfortable) and that was the last time we saw the caterpillar. It fully covered itself with sand. The children still took turns and observed the sand. 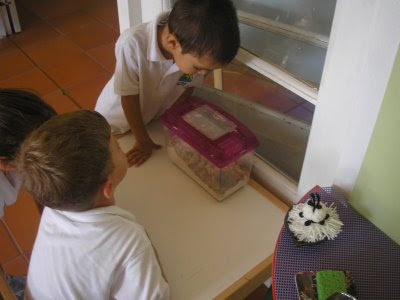 This is what the caterpillar turned into over the week long break: 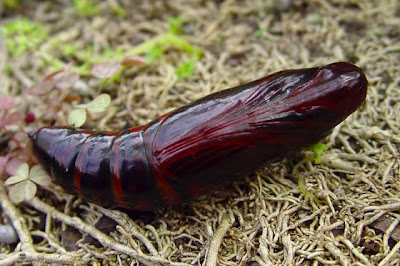 The pupa is very large and shiny and moves a lot! When Sayenne and I first decided to "check on it" by carefully removing the sand around it, the pupa wriggled so violently I threw the trowel into the air and leapt up with a screech (1960's housewife/mouse encounter style).

It will be 22 days before the caterpillar's cells have been preyed on by its formerly dormant moth cells, and the pupa transforms into a Frangipani Sphinx moth: 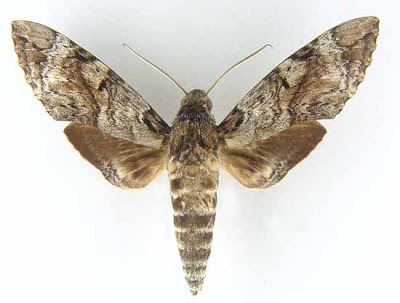 This is a large member of the Hawk Moth family, also known as Hummingbird moths because they have a long proboscis that they insert into flowers while in flight.

Now, if all that is inside of the cocoon shell at this moment is half transmorgrified liquid- what is making the pupa move so frantically? Yeek. Miracles of science.
at October 12, 2008

Email ThisBlogThis!Share to TwitterShare to FacebookShare to Pinterest
Labels: nature.

I believe you have my pet caterpillar, Bernie. Please tell him to fly home as soon as he emerges from his cocoon.

I thought this was a Hawk Moth as well but I now believe this is a Frangipani Sphinx Moth Caterpillar.
Here in Saint Lucia they are all over our Feangipani bushes.