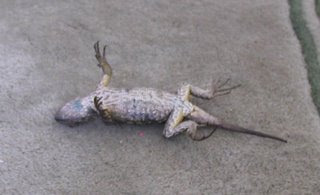 Roger likes to bring things in his pocket.

He says, “Guess what's in my pocket?”

On another day he walks through the school gate with his hand in his pocket.

“Guess what's in my pocket?”, he asks me. “Hm, did you bring another pin?,” I say. “No,” he says. He takes out a 50 florin bill. “Wow”, I say, “where did you get that from?” He looks at me and says “When my mom was showering I went in her room and I got it from her purse.” I tell him I think he should give it back to her later, she might be wondering where her money is.

Another day he says, “Guess what's in my pocket?”

But it's really a cockroach. Everyone gathers near to see the “bee.” I explain, “Roger brought a cockroach to show everyone. Don't worry. It's not alive anymore. Lets count it's legs.”

On another day, Roger took off his shoe and inside of it was a big dead lizard. He has a way of talking... he said “What the?!” I said, “Roger, there was a lizard in your shoe. You must have not noticed he was there when you put your shoe on this morning.”

True stories about children are the best. I don't even know Roger, but I love him. I once had a little girl who kept peeking in her pocket one day. I finally asked her what she had in there. I thought it might be crackers or candy. Turns out it was 5 caterpillars. They were all alive!

What a funny kid! He must keep your days interesting!

Hi! I've been following your blog for a little bit now and I loved this story. Thanks so much for sharing :}

I love this post about Roger. It's so endearing and really gave me the giggles. :) These are the moments that really make teaching so entertaining!