All Together Singing in the Classroom 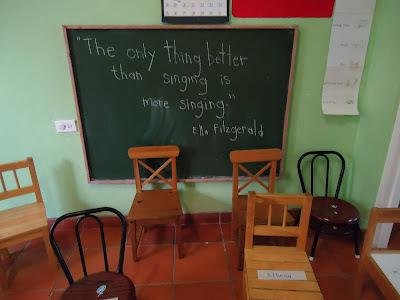 A few months ago while browsing through books, I came across a little gem of a book called "All Together Singing in the Kitchen" by Katrina and Nerissa Nields. The hand drawn pictures, and the simple and honest writing style drew me in immediately. The book feels like home. I'd been searching for music resources to enrich and reinvigorate our music curriculum at school and I've also been very interested in using music to deepen the sense of community and empathy among the children (and school community). I think singing is the vocal equivalent of walking on the line.

The book is filled with practical ideas on how to incorporate songs and music into daily life with kids. There are chapters on singing, movement, games, listening, making musical instruments, and creating musical traditions. There were so many valuable bits in it, that after finishing the book, we started incorporating much from it in our classroom immediately.

One place in particular where it had a major influence was in our yearly sing along. The sing along is basically an evening where the families come to celebrate the community through song. In the past, our sing alongs have had a feel of performance- children sitting on one side of the room, and parents loaded with cameras sitting on the other side. (I have lots of thoughts about how taping the whole thing, or even business with pictures puts a barrier between the camera holder and the present moment, but that's subject for another time.)

This year we changed all that, and moved away from the feel of performance towards a more collaboration friendly arrangement. The seating arrangement was of two concentric circles, the inner circle for the children, and the outer one for their parents. Several things were accomplished with just this simple change of seating:

*Children felt the support of their parents who were sitting right behind them (some of them took little breaks during the singing to sit in their parents laps and then returned to their chairs).

*It no longer felt like a performance because we were all at the same level and doing it together (something about adults in child size chairs and how one child stood up in the middle of a song, used the restroom- we heard the toilet flush- and returned to his chair to resume the song). In a more stage like setting this would have been perceived differently.

*Children were seated directly in front of their parents (with their backs to them), so people's view was of other families and other children (instead of a stage setting where they tend to only focus on their child)

*Even though we have a beautiful little garden and it was decked out with christmas lights, we sang indoors (where it was stuffy and cramped). We maximised sound in this way- even when we sang softly, it was audible. And when we sang loudly it was really it felt like rocking the house! We chose lots of call and response songs, rounds, and made use of our home made instruments.

My only intention at the event was for everyone to have a good time. That meant removing the pressure from the children to perform, using humor and silliness (the children's expertise) to help people feel comfortable with singing ("you don't have to do it perfectly and it doesn't even have to sound good"), an by being relaxed and enjoying it myself (which I often forget to at parent events).

The results of these changes were overwhelmingly positive. I mean dads were giving me high fives at the end of songs, and children danced next to their chairs, and people were happy. Now I'm thinking about how else we can adapt our other school traditions to this model that focuses more on strengthening the bonds of our community, instead of the accustomed use of children's performances to show how good they are and how much they've learned.(I think there's a time for that too, but it's good to know I have different-better?- options.)
at March 15, 2012

Thank you for the tip on the book. I can't wait to check it out. My own mother, who had no musical training, literally taught is all to sing when we were all together in the kitchen. I do the same thing. It can be so fun to find a good, like-minded book to give some fresh ideas and maximize what we do.

Thanks so much for writing about our book! And I love your idea about the concentric circles. I am going to incorporate that idea into the classes I teach for kids aged 4-9. How wonderful that you are rocking the house!

Hi Susanne,
Thank you for this! Even the seating arrangement change, which seems to simple, is a brilliant way to change the whole 'feel' of the event!
I have already placed an order for the book and can't wait to see it!

Hi Susanne,
Thank you for this! Even the seating arrangement change, which seems to simple, is a brilliant way to change the whole 'feel' of the event!
I have already placed an order for the book and can't wait to see it!