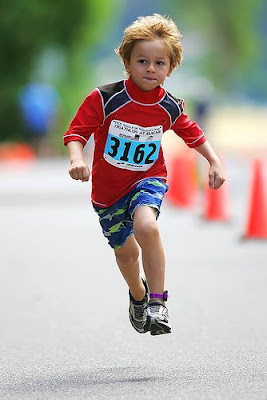 Yesterday I ran my second ever 5K race. I have never been much of a runner, but running is a sport that fascinates me because of its egalitarian simplicity. You need no gear other than a good pair of knees. 5K is not really a big distance per say, but considering that a year ago I was out of breath after a 2 minute jog, I have come a long way. Although my running form perhaps looks more like a fast-walk, or a slow-jog, I enjoyed the race tremendously.

Both races that I've participated in, I've run with a mindset of basically maintaining an even (slow) speed throughout the course. I start in the back where no eager athlete will trample me, and gradually pass the large ladies in spandex, the little-bit-joggers, and some of the fast starters that run out of gas early on.

In both races so far I've managed to find my niche right alongside the 9-11 year olds. These little guys bust out running for about 300 meters, and then they walk, all of this while they chew gum or drink out of juice boxes, then they explode again. This is their rhythm of running. I pass them, and then they pass me, and so on until the course is finished.

The mentality of pacing oneself, of saving something for later, is a capacity exclusive of the adult world. It is safe and solid. There is something that is so beautiful though, in a child that is giving all of it's energy for the minute or so that it lasts, in a full fledged run.

When I was done and stood in the sidelines sweating and my calves throbbing to watch the real athletes, the runners, complete their 10 K at the finish line, they looked like the children that I had run with. There was something primal and wonderful about them expending all of their energy in simply going as fast as they can.
at January 26, 2009