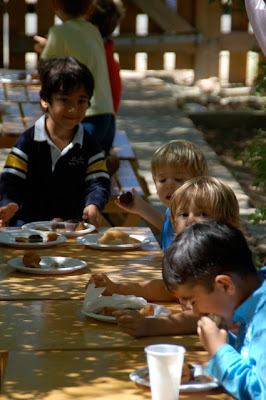 With experience growing, organizing family events at school is becoming increasingly enjoyable and less stressful. On Tuesday we had our first Holiday Picnic and children's performance at school. Because we have children of multiple religious denominations, we kept the Christmas aspect of it more low key and focused more on the end of the year and a time together before the holiday break coming up.


Early in the day, the children helped to put all of our classroom tables and chairs outside under the trees. We laid out a couple of picnic blankets as well in shady areas of the garden and invited the parents to come to the school at lunch time.

The children had come dressed out of uniform that morning which already lent things a very celebratory air. We had practiced a set of songs and poems for a couple of weeks that the children were going to present to the parents. We chose songs in English, Dutch, and one in Spanish to reflect the languages of the school. And each of the oldest children had memorized a poem (with the help of their parents) and presented them individually after each song. It was a short and happy performance, very relaxed.

Parents each brought a dish to share for the picnic and the spread was amazing. After the performance everyone went outside with plates of food to eat in the nice weather. And after lunch, families went home.

I loved this gathering because it reflected a communal effort (parents bringing food, helping oldest children prepare their poems) and a really calm and happy get together. The children and adults enjoyed it equally.

I'd never before wanted to organize something at this time of the year feeling that families were hectic enough with the holidays coming up, but after this year's event, we will surely repeat next year.
at December 17, 2009

Hi, Susanne! I could feel the peaceful atmosphere from the picture. How nice to hold such a gathering!It seems you enjoyed it so much:-) Have a nice holidays and I wish you and your school peace, harmony and joy in 2010!