Things in the classroom that I'm loving.


Sometimes, the smallest tweaks in the classroom yield the greatest results. These are some small changes in our class that I'm all over at the moment: 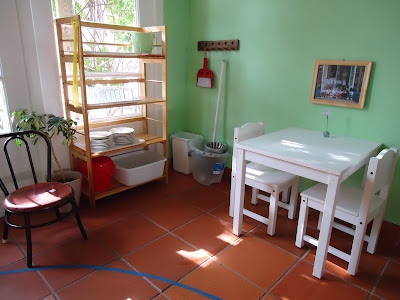 Our new and improved snack area. This year, I moved the snack area so that it is not in the middle of the room where it used to be. Socializing at the snack was bringing the volume in our classroom up quite a bit, and it was an area frequented by loiterers. I put it in a corner of the room that's closest to the kitchen door (which makes set up easier for the children). We put a class picture next to the table, which creates a nice topic of conversation for the children and helps with the orientation of the new children. We have glassware (finally) in our snack area, and the children handle it so carefully compared to our setup last year. And best of all, the snack waiting chair. there are no more hang-outers at snack now that there is a specific place to wait for snack and a one child waiting limit. 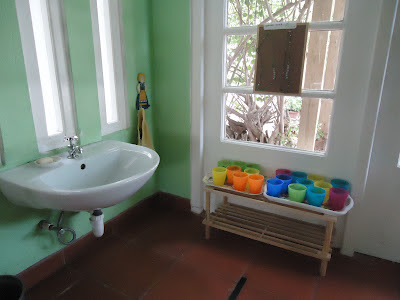 The getting-a-drink-of-water station. According to the internet (so it must be true) in Aruba we have some of the purest water in the world (thanks to a process of reverse osmosis desalinization, look it up.) So we can drink straight out of the faucet. In the past, all water drinking was done at the snack table, which just meant more snack table traffic. This year we have labeled children's cups for drinking at the faucet. It was too expensive to install a water fountain, so this has been a great alternative and a pretty energy green one. 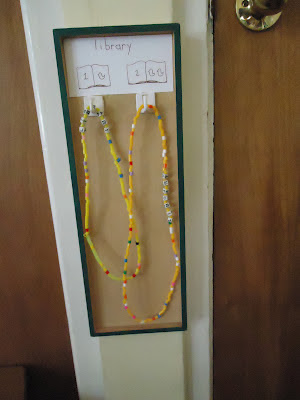 Two necklaces for going to the library, two for the garden. We removed the book corner from the classroom (which much like the snack area was ALWAYS in demand, and children LOVE to talk about books together so another source of excited volume inside the classroom.) Instead, now the children can take their love of books and conversation to our small library and get as excited as they want about the sharks on the page. This has reduced the volume in our room considerably. Having two garden necklaces so that two children can play together outside when they want to has been really interesting. Because of staffing issues, I'm not ready yet to progress to a fully indoor-outdoor program, but in my observations so far, the usage of the outdoor work has been responsible. Some of the children spend more time outside than others and I am taking note on what I see them do, and how much time they choose to spend out there in preparation for our transition.


Name tag ROCKS. It being so windy where we live, stuff is constantly flying all over the room. Laminated nametags last year would have to be weighted down artfully with works or jamed between parts of works, and it was high time to make these. For those who don't have nametags in their room, they are used to claim ownership over a work that for one reason or another has to be left out (bathroom use, group lesson joining, extended work, coming to walk on the line).


Removal of most whole group lessons, simplification of routine. We've removed most group gathering times, and opted for mostly small group and 100% voluntary joining. We no longer sit on the line (a big no-no in AMI)(*except for birthdays) and instead gather wedge style (which has worked out great). The routine is simple, there is space and choice for joining or not, and this has increased the sense of ease within the group and staff. 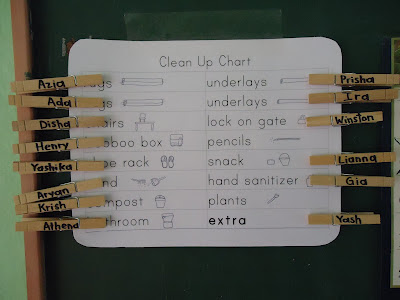 Cleanup chart. At the end of the day (the last 5-10 minutes) we play music softly, and the children know it to be the signal to put work away and do their clean up work before going outside to meet their parents. :)

It is amazing how small tweaks can change the whole feel of the classroom and the flow of the day. I love the look of your classroom. It is very inviting.

I think I am the only one who at my school who doesn't do that whole group circle time. I start out doing it in the beginning of the school year for a few weeks, to review our ground rules and to help the new children. We also use that time for class discussions. The rest of the time it is all individual and small group lessons. I really like that wedge idea, too. I may try to do more of that again.

I envy the freedom of being able to go outside and to the library when desired. We are so large now, that isn't an option. I do invite them to go with me on a regular basis, though.

And adore the name rocks. I have a thing for rocks. :-)

Hi Susanne, great post! I love being able to peek into your classroom through the photo's you post. Most tweaks to your classroom are things that we have changed recently as well, funny how you sometimes need to distance yourself or take some time out to realize what is working and what's not. Have a great school year!

The cleanup chart is so cute..Loved your classroom!