Kicking Ball Tutorial-ish. Hear Ye mothers who want to make soccer players out of your babies. 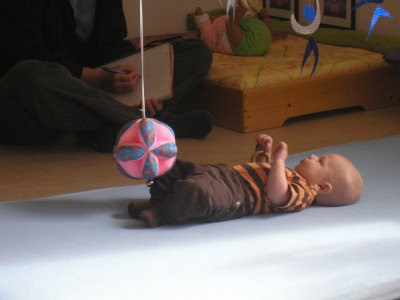 Next week I'm going to Costa Rica to visit my family and my very pregnant beautiful sister. I am making all kinds of goodies to help her outfit the infants' room/areas. Among them, my favorite A to I material, the Kicking Ball.

The Kicking Ball I was shown how to make was originally designed by a material maker in Japan by the last name Takane who, along with his wife runs a Montessori school there.

The Kicking Ball is a really versatile material. It can be hung close to touching the baby's feet at around 3 months of age when the baby is lying down. At this age the ball is meant to encourage kicking motions, controlled leg movement. The feedback that the little bell gives when it is kicked is a pleasant sound that lets the baby know that he did something and there was a result. This is the secret weapon of Brazilian mothers who want to start their children with soccer training early on. We're on to you ladies!

When the baby is a little older and can sit, the ball can be hung in front of the baby. The purpose at this age is for the baby to bat at the ball. From my experience of babies and this toy, let me tell you, they are fascinated by it!

In some months when the baby can sit and is beginning to crawl the ball is great for mouthing and chasing. Because of its shape it won't roll too far away from the baby. So the baby can be holding it, drop it and then will be encouraged to reach/crawl for it.

I think it is a very striking toy with beautiful geometric patterns. It is easy enough to make, but looks very difficult. So you get some praise for it too. Very nice.

So here's how you make the thing: 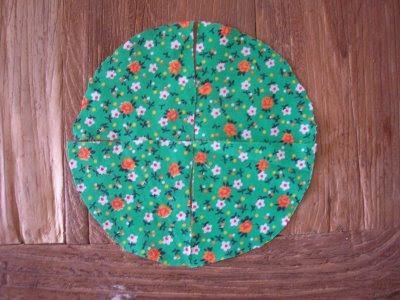 Trace 6 circles of about 16-18 cms on your fabric and cut them in quarters. (Now if you're me AFTER you made this ball, then you can cut them in halves instead and spare yourself a little extra sewing.) I just a traced a kitchen bowl directly onto the cloth. But you can make it in paper first and then you'll see why.

Next you need the "eye" pieces. The measurement for these is made when you superimpose two of the quarters you cut from the circles (this is why a paper pattern is best first). 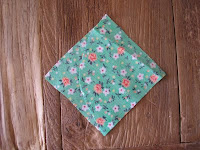 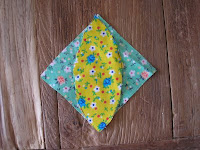 Trace and cut 12 "eye" pieces from a high contrast fabric.

Do as I say here, NOT as the picture shows. Sew the "eye" pieces first onto the fabric quarters. You want to sew the quarters last, and leave a little slit open so that you can turn them inside out to stuff them. 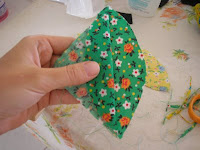 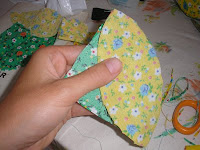 What I did though, was sew the quarters first and then sew the "eye" pieces on. I left the open slit on the "eye" piece and then had to stitch them closed by hand. The eye pieces are the most visible of the ball, so you'd much rather have the slits for stuffing on the quarter's side instead of on the "eyes".

After sewing the pieces together, turn them inside out. 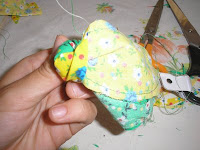 Then stuff the pieces with some fluffy stuff. My suggestion is to over stuff them. The ball is best when it is really almost bursting at the seams. 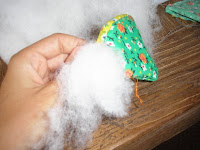 Then stitch them shut. Now you have a nice little bundle of 12 triangularish pieces. It is time to figure out how to put the ball together. Good luck to you. In my course, people did all kinds of strange things to get their kicking balls in order. My suggestion is to put 4 pieces together for the top (see below), and then 4 together for the bottom. 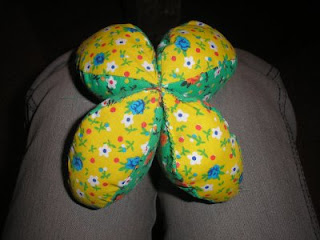 Then sew the middle pieces on the top, and finally sew the bottom on. I know this sounds simplistic, but trust me. I don't really know how to sew and I could do this. 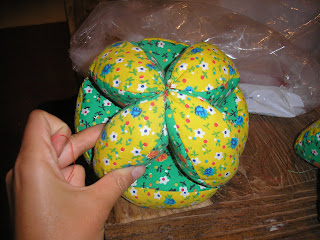 Now your ball is finished. It is beautiful!

Sew about a yard of some nice bright ribbon on it (for hanging) and top off the ribbon with about 20 cm of elastic (for a bouncy and happy effect when the baby kicks or bats at it). All you are missing is the nice sounding bell for the bottom. Sew that bell on VERY tightly because when a baby gets this in their mouth they will try to chew it off. Also make sure the little ball in the bell has no way of coming out. In other words- use common sense and be safe. 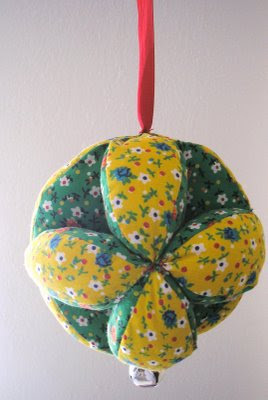 This is georgous I going to give it a shot. Thanks for the tutorial

Thank you so much for the detailed tutorial. This is way better than the instructions I got from my course, which was hard to understand for someone like me without strong knowledge of sewing. This looks great and it gives me some excitement and confidence to try making one! Thanks again.

Thank you, this is such a good tutorial!
How do you hang the ball from the ceiling? Probably a silly question but I have no idea...
Thanks again!