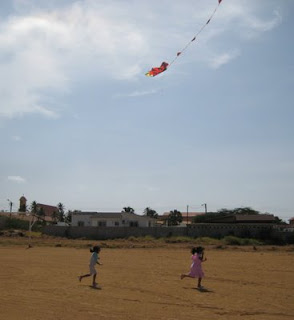 By osmosis (I didn't realize it was kite season in Aruba) I planned a kite making project for the children a few weeks ago. Unburdened by any expertise, and completely open and humble to the possibility of the project failing, I read and re-read the instructions in my kite book (optimistically named) "25 Kites that Fly." The instructions in the book are not really that great- the author's ability to make kites that fly is not in question, but his capacity to explain in simple terms how to get there is (a little bit).


The project ended up involving MOSTLY adult assistance- kite making is pretty difficult and we don't have any nimble 6 year olds in our group yet who could manage the tying(the 4 year olds are getting there though!). The children ended up doing a lot of observing as the kites were being formed. Later on children decided colors and cut/pasted decorations on their kites. They sure were excited when the kites were done.


And after having the kites on display this week to talk about their parts and function, today we took a trip to the nearby local soccer field and tried out the kites. 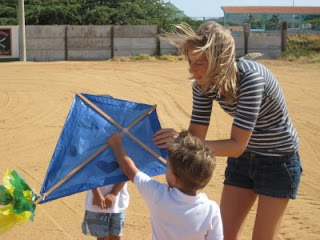 I'd say that more than the success of the kites themselves (which was arguable), the children's enthusiasm for the process and the fun they had out in the field today made it feel worth it.
at April 29, 2009

This looks like fun. It reminds me of my cousin in ES helping my boys build one.