Let's Get Together and Sing 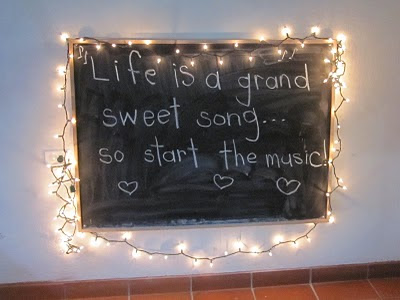 Last week we had our yearly Sing Along at school. It is really my favorite school event of the year.

In preparation for the Sing Along I chose the songs we'd sing this year early on and we have been organically incorporating them into our daily singing since August. By the time the Sing Along neared, we just had to decide who wanted to sing what because the children all knew the songs well. Children naturally identified with a specific song and you could tell by the enthusiasm in their voice when they sang.

So that families would know the songs as well, I burned CD's for them with the main songs and added it to the invitation for the evening two weeks prior to the event. It was touching to see the parents drop off their children at school in the morning and hear the songs blasting from their cars!


This year we invited friends to join the families for the evening. Our tiny school was packed!

Jessica's father is a professional musician and we were lucky to have him join us on his electric guitar. This really added depth to the music, since my guitar playing is fairly simple. 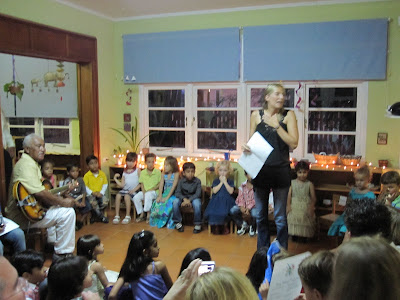 I have added our song list and chords HERE. Commentary from parents was very positive about how the songs chosen were very uplifting and really made us feel a sense of togetherness.

There are few things that bind people's hearts together like singing!


We lined up our school walkway with lanterns, and decorated the entrance of our school: 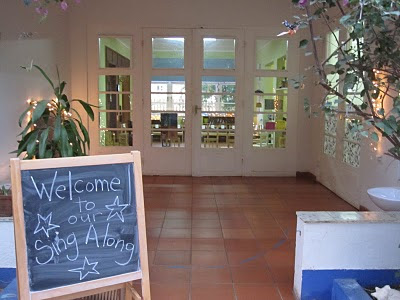 Inside, the chairs with children's nametags were lined up and ready. The parents and friends were aranged in a circle around them.

After the program, we celebrated the school's second year with a beautiful cake(donated by a parent- never seen anything like it- with the children's picture lasered onto the icing!) and sang Happy Birthday. 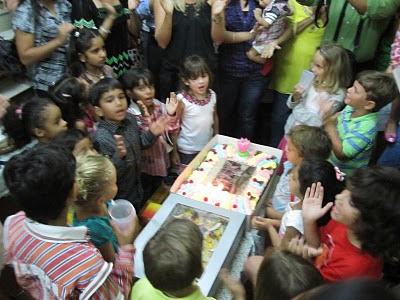 Big conglaturations for the 2nd birthday of your school!!! Such a nice event! Hugs, Yasuyo

What a wonderful initiative, everyone looks positively happy! Well done on organizing this and good luck in your third year.

This is a terrific idea! As a former musical theater actor and music major, we learn so much music during the year and I am always looking for a way to involve the parents and let the children show the music they've learned. I hope you don't mind if I use your idea! I may just have to come and visit you to see how it goes--hopefully in the middle of our Minnesota winter!